My Trip To Paris. Part One. 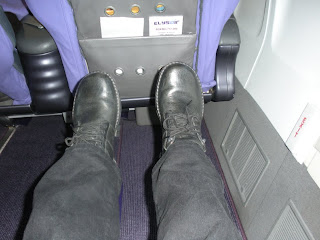 My Trip To Part One

Where to begin! On Monday 1March2010 I left work at 2:00pm and arrived home. I packed up Cosmo, my JRT to take him to A1 Bed and Biscuit Kennel in Chardon. http://www.a1bedandbiscuit.com/

He really loves that place which will be his home for the next week.

I went home and finished packing. I resolved to fit everything in my eBags weekender carry-on. My clothes fit the carry on without a problem. I also needed to see if I could go stand-by on an earlier American Airlines (AA) flight, as my flight to from JFK was switched to leave from and of course I had already purchased non-refundable tickets. Oh well. I spoke with a “customer rep” from AA who said the flight I wanted was pretty full and that for $50.00 I could get a guaranteed seat, so I took the bait and forked over my credit card number. I went to bed about 10:00pm after watching the latest episode of “24”.

Damn, it’s about 4:30am in the morning and I am finally out of bed about to hit the shower. No human should be up at this time. I manage to complete my tasks, have some breakfast, and load the car. I make my way to CLE airport on a deserted freeway. Could I be the only idiot out here?

I drop off my car at . http://www.parkplacefree.com/ It’s only $5.00 a day and they provide a very reliable shuttle to the airport, about a 3 minute ride. I make my way to the self service kiosk and I print out my boarding pass. This flight to LGA lasts about an hour on a small jet; Embraer ERJ-3. Then it’s on toward security screening and of course I set off the scanner and then have to subject myself to a physical pat down by a power hungry smurf. I make my way to an empty gate. I finally realize that this flight is empty. The GA states there is only seven PAX on board today, and states that Tuesdays are pretty light. I was pretty pissed off as I was lead to believe that this flight was nearly full, $50.00 just was flushed down the toilet.

The FA said we could sit anywhere; however the exit rows were taken, so I just took a seat after I stored my carry on in the overhead bin. The flight was pretty smooth except for a small bit of turbulence. I was offered an entire can of Diet Coke. BOB snacks were for sale, but I declined. We landed on time and I made my way to the ground transportation to the lower east side and the WTC area.

I had great directions using public transportation into NYC. Thanks Blumie! I managed to walk around the public areas around the WTC construction site. I visited the memorial, took some pictures and spoke with a few LEOs . I stopped for lunch at the Stage Deli, visited the Century 21 store, and a few others before making my way to EWR for my early evening flight.

I arrive at EWR already to check in at the OpenSkies (EC) https://www.flyopenskies.com/splash counters; adjacent to British Airways, but they are not open. The BA agent told me that EC does not open until about 2.5 hours before the flight leaves. How inconvenient! There were several other PAX also waiting to check-in and drop off their luggage and they were none too happy. One of the PAX, a French woman living in the wonders how EC stays in business. Also, EC has a lounge that is shared with Jet Airways, which is also only opened 2.5 hours before the flight. Not a good way to run an airline.

So I take a seat and wait, and wait, and finally a spark of life. I check in and receive my boarding pass and make my way to the lounge; tucked into a corner of EWR airport. The lounge is average in size and does not have adjacent bathrooms. There are local newspapers and some magazines. The beverages consist of wine, champagne, alcohol, pop, water, and juice. They have sandwiches, cheese crackers, and a variety of dips. Nothing hot was available. About 30 minutes before takeoff we made our way to the gate and boarding was pretty easy.

The plane was a Boeing 757-200; a former L’Avion plane that was converted with 12 lie-flat seats and the rest “old school” style reclining seats that reclined to about 140 degrees. The seats are not the seats pictured on EC’s website. Upon arriving to our seats we were given a choice of champagne or juice. The FA gave the usually safety demonstration in English and French, and soon we were off to , a smaller airport near to . Soon, hand held video players with recent movie releases, some TV shows, music, and games were given out to the PAX. The only problem I had was the sound was horrible.

About an hour into the flight dinner service was offered. I realize I should have ordered the diabetic special meal. I managed to request the special meal on my journey home. The food looked good, but was loaded with calories and fat. Well, I’m on vacation; aren’t I?

I did try to sleep but it was impossible to get comfortable as the controls for the seat were all manual and hard to operate. The foot rest was metal and my long legs and big feet just did not fit. Somewhere over the Atlantic one of the PAX sustained a medical emergency; passing out and splitting her chin open and requiring a butterfly bandage, oxygen and immediate medical attention. An announcement was made for a doctor on board and the woman in the seat ahead of me answered the call. I really never knew what happened and soon after we landed in , the paramedics and police boarded the plane to assist.

We landed on time and I made my way to the ground transportation area. I bought a ticket on the Air France bus to the Metro station “Invalides”, which was very easy.